The inaugural Secularist of the Year was Hans Pietersen, founder of the “Organisasie vir Godsdienste-Onderrig en Demokrasie” (OGOD). Hans lodged a complaint in the Gauteng High Court against six public schools in Gauteng and the Western Cape, following complaints by parents about religious discrimination and infringement on their children’s constitutional rights. The court made a declaratory order confirming that a public school cannot promote that it adheres predominantly to only one religion or hold itself out as promoting the interests of one religion over others. In essence, this means that public schools may still conduct religious observances and promote religious values provided that these observances and values recognise a diversity of religions (including atheism or an absence of belief) and do not favour one religion over others. 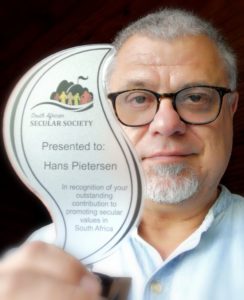