South African Secularist of the Year 2019

Prof Sakkie Spangenberg is South African Secularist of the Year

Since 2017, the South African Secular Society (SASS) has recognised the contribution of secularists in South Africa to their cause. This year Prof Sakkie Spangenberg is the recipient of this prestigious award.

Prof Spangenberg is Professor Emeritus & Research Fellow in the Department of Biblical and Ancient Studies at UNISA. For many years he has challenged the traditional dogmas of the Christian Churches. Together with other academics, he started an alternative secular movement. This created an opportunity for open debate and discussion of 21st-century issues like the origin of the cosmos, biological evolution, society, the environment, personal growth and related matters. In collaboration with the NHN he created greater awareness of the rigorous scientific analysis of the Bible. This approach sees the Bible as a remarkable piece of literature and storytelling, which must be interpreted in its historical context and not seen as the infallible Word of a God.

When he received his award, Prof Spangenberg said, “The first sentence on the website of the South African Secular Society reads: ‘To be a secularist means to oppose religion-based discrimination’ which –put another way– means others are disadvantaged or discriminated against because of what they believe in. I fully endorse this statement. I would like to thank the South African Secular Society for honouring me with a certificate acknowledging the views and convictions which I expressed over the past twenty-four years.”

Prof Spangenberg made a similar statement in 1996 at a conference of the Old Testament Society in South Africa (OTSSA) held at the University of Stellenbosch. The paper was titled “The book of Jonah and religious pluralism”. He argued that the book of Jonah challenges Christians in South Africa to look into their conviction that the Christian religion is superior to other religions. Some of his statements, reported in the Afrikaans newspaper “Die Burger”, led to a heated debate. Prof Spangenberg received many accusations, but also many letters of support. He believes that the idea of Christianity’s superiority is one of the root causes of discrimination and Racism.

Prof Spangenberg was one of the co-founders of the NHN (Nuwe Hervorming Netwerk) 15 years ago. Based in Midrand, the NHN has bi-monthly lectures that are open to the public. They also offer an annual full-day or weekend seminar, and have a very active Facebook page, YouTube channel and website.

About the NHN (English)

The NHN is a network of open-minded creative thinkers. They question, explore and stimulate thoughts on 21st-century realities and values. Their lectures and conversations highlight issues affecting the essence of humanity and societies. Topics thus also involve the arts, ecology and the cosmos. They form supportive networks with others who value responsibility, respect and diversity. Thus, they envision a ripple effect that can liberate and contribute to a more brilliant future. 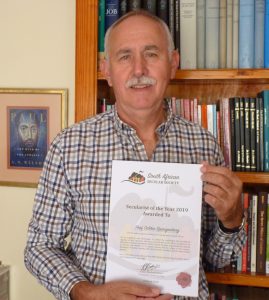